Who was David Hack? 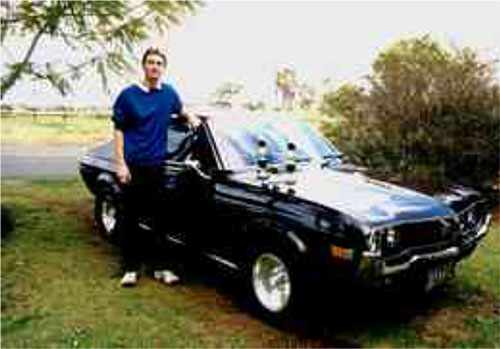 David was a passionate young man whose life was cut tragically short by Non Hodgkins Lymphoma (Leukaemia). The loves of his life were cars and photography and he had the makings of a brilliant career as a motoring photo-journalist, contributing to magazines such as Street Machines, Fast Fours, Wheels, and Performance Street Car Magazine. He had a number of successes with major photographic competitions and was an extremely talented young man. For his 28th Birthday, a huge “Birthday Bash” had been organised at Aerotec Hangar, Toowoomba Airport, but tragically he passed away two days before it was held.

Members of the Rotary Club of Toowoomba North, some of whom were involved with the “Bash”, have since held the David Hack Classic Meet as an annual event, donating proceeds to Leukaemia Foundation, Blue Care and other charities, in order to create a lasting memorial to a wonderful young man. David is seen here with motor racing ace Dick Johnson. Our special thanks to Lynette Zuccoli and Wayne Milburn of Aerotec, for their help in allowing this project to proceed so wonderfully.